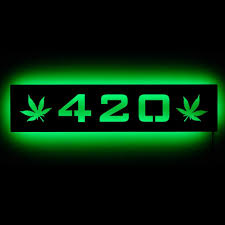 420, 4:20, or 4/20 is slang in cannabis culture for the consumption of cannabis, especially smoking cannabis around the time 4:20 p.m. and also refers to cannabis-oriented celebrations that take place annually on April 20.

“The term 420, which is most often attributed to police codes, actually began in 1971 in Marin County, California, when five San Rafael High School pals who enjoyed pot would meet after class at 4:20p.m. by a statute of chemist Louis Pasteur. One of the guys became a roadie with a member of the band Grateful Dead, who caught wind of the code word created by the one-time students, and the rest, they say, is history.(https://www.nbcnews.com/think/opinion/call-it-weed-marijuana-or-cannabis-420-time-celebrate-growing-ncna996591, “Call it weed, marijuana or cannabis…“, April 20, 2019,  Simon Moya-Smith)”.

This site uses Akismet to reduce spam. Learn how your comment data is processed.

Get Notified of New Posts